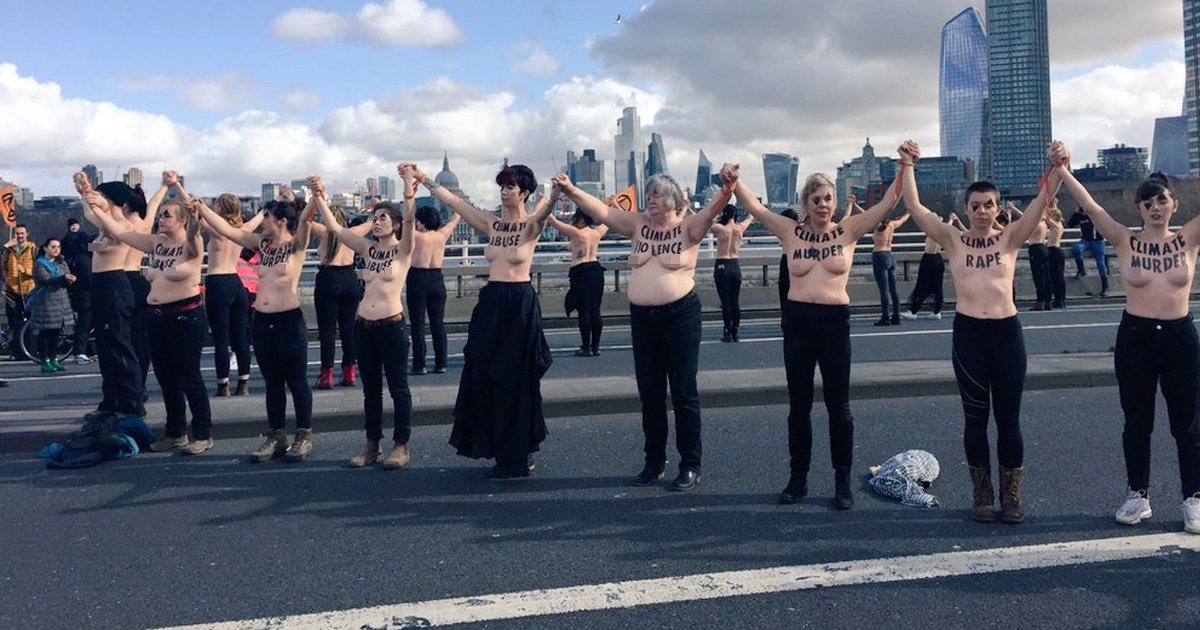 Topless women formed a chain across Waterloo Bridge today with the words ‘climate rape’ and ‘climate murder’ painted on their bodies.

The activists were taking part in a protest for Extinction Rebellion, the environmental group which shut down large areas of central London last year.

At 11am, a group of 31 women stripped from the waist up to symbolise the vulnerability of women around the world in the face of climate change.

They chose Waterloo Bridge as it is also known as The Ladies’ Bridge, because many of the welders, stonemasons and labourers that built the bridge during World War Two were women.

The protest is intended to highlight the disproportionate impact of climate change on women, and the ‘resulting increase in hardship, violence and rape’.

To mark International Women’s Day, action is also taking place around the world including in Turkey, Pakistan, Nigeria and Spain.

Sarah Mintram, a former teacher who took part in the action in London, said: ‘It’s mainly women in poorer countries in the global south that are experiencing the increase in violence but this will be the reality for all women if the climate and ecological crisis continues to go unaddressed.

‘We are here to raise the alarm about what is happening to our sisters around the world and to tell women in the UK the climate and ecological emergency is your issue – it will affect you as a woman if we do not persuade our government to take urgent action starting now.’

The group cited a January 2020 report by the International Union for the Conservation of Nature which found that climate breakdown and environmental degradation are driving an increase in violence against women.

The report found that deforestation and the degradation of land mean women have to travel further to collect the things they need, like firewood, and are exposed to violence, rape and abduction when they make these journeys.

A spokesperson for the group said: ‘Furthermore, when natural disasters hit, which is happening more and more as a result of climate change, women are exposed to sexual violence in evacuation camps.

‘UN figures indicate that 80% of people displaced by climate change are women. Globally, women are more likely to experience poverty, and to have less socioeconomic power than men. This makes it difficult to recover from disasters which affect infrastructure, jobs and housing. For example, after Hurricane Katrina in 2005, African American women were among the worst affected by flooding in Louisiana.’