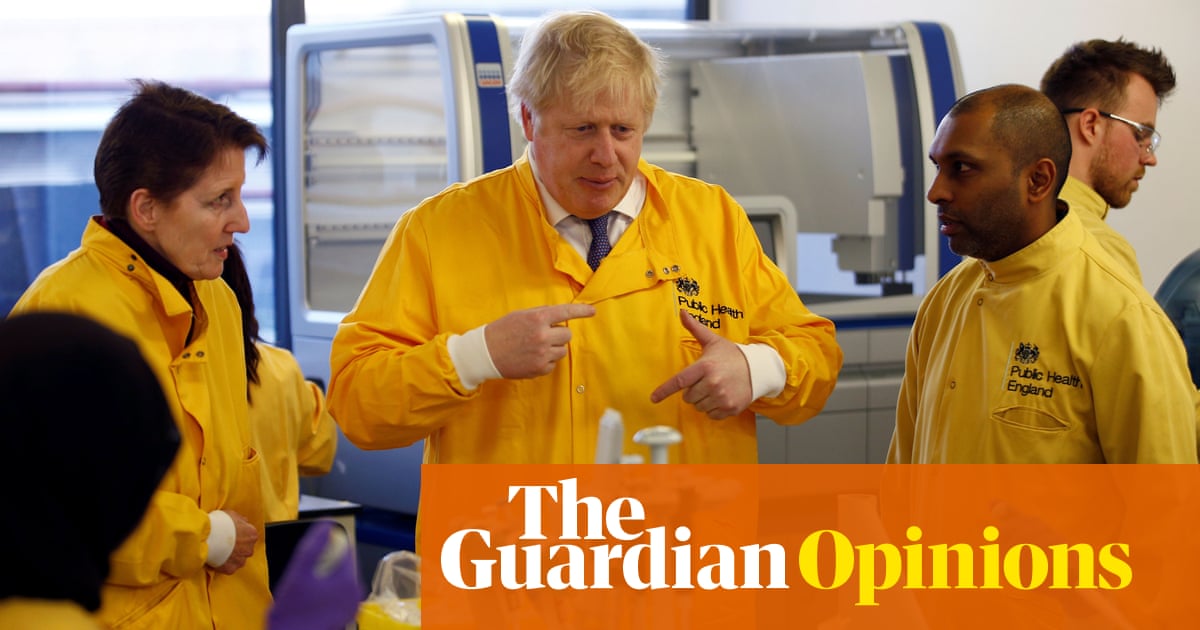 Never, ever, should a government use war as a metaphor in a time of peace. Britain is not at war with coronavirus. The phrase and its cognates should be banned. Those who exploit them to heighten panic and win obedience to authority should be dismissed from public office.

No, you won’t get the coronavirus from Chinese food. And don’t drink bleach | Ranjana Srivastava

Last week the prime minister, Boris Johnson, leaped from two weeks of inertia to give his Churchill impersonation. He donned a costume to look like a health worker. He dived into Cobra, haunt of publicity-hungry prime ministers, and pushed aside his health secretary, Matt Hancock. Aides drew up a “battle plan” to confront forecasts of 80% of Britons who “might be” infected, and 500,000 who might be dead.

War is the absolute last resort of a nation facing existential collapse. It implies extreme violence. Words such as battles, fights, enemies and threats to nations are clearly directed at accreting power and suspending liberty. They encourage xenophobia and attacks on supposed “enemy agents” – at present, Asian communities. To promote this under the cover of any “worst-case scenario” is inexcusable.

Never, Johnson must have murmured, would so many owe so much … to oneself. He stood behind a crested lectern, flanked by two scientists like five-star generals. He declared a four-point emergency strategy, plus 27 pages of “sweeping new powers” to meet “a national challenge”. He would call up retired health workers and army units. It was his first dry run at war.

The prime minister’s attempt to inspire calm was ridiculous. If calm was needed, why was he there? Within hours, the stock market plunged. Hundreds of flights were cancelled, even to places untouched by the virus. Workers were told to stay at home. Holiday bookings collapsed. Even James Bond was ordered to take fright and scurry home.

When hysteria is rife, we might try some history. In 1997 we were told that bird flu could kill millions worldwide. Thankfully, it did not. In 1999 European Union scientists warned that BSE “could kill 500,000 people”. In total, 177 Britons died of vCJD. The first Sars outbreak of 2003 was reported by as having “a 25% chance of killings tens of millions” and being “worse than Aids”. In 2006, another bout of bird flu was declared “the first pandemic of the 21st century”, the scares in 2003, 2004 and 2005 having failed to meet their body counts.

Then, in 2009, pigs replaced birds. The BBC announced that swine flu “could really explode”. The chief medical officer, Liam Donaldson, declared that “65,000 could die”. He spent £560m on a Tamiflu and Relenza stockpile, which soon deteriorated. The Council of Europe’s health committee chairman described the hyping of the 2009 pandemic as “one of the great medical scandals of the century”. These scenarios could have all have come to pass of course – but they represent the direr end of the scale of predictions. Should public life really be conducted on a worst-case basis?

Both Hancock and Britain’s chief medical officer, Chris Whitty, have struggled to contain the alarm. The government’s action plan pointed out that the virus is highly contagious, but the “great majority” of those who develop symptoms will experience only a “mild-to-moderate but self-limiting illness”. Every medical expert I have heard on the subject is reasonable and calm.

Not so politicians and the media. They love playing to the gallery, as they do after every health scare and terrorist incident. Front pages are outrageous. No BBC presenter seems able to avoid the subject. Wash hands to save the nation. The BBC must be sponsored by the soap industry.

It is always hard to reflect balance and perspective in news. In this case, it is surely essential. It would help if Hancock was handed back the virus brief by Downing Street. It would also help if events were not cancelled, factories and offices not closed, and holidays not abandoned.

Of course, I could be wrong. I could get ill. Millions could die. But it is also possible that come the spring, this crisis will have passed. So for the moment, if you see a virus story containing “might” “could” “possibly” or worst-case scenario”, stop reading. You are being fed war talk. Let them wash your hands, but not your brain.

• Simon Jenkins is a Guardian columnist