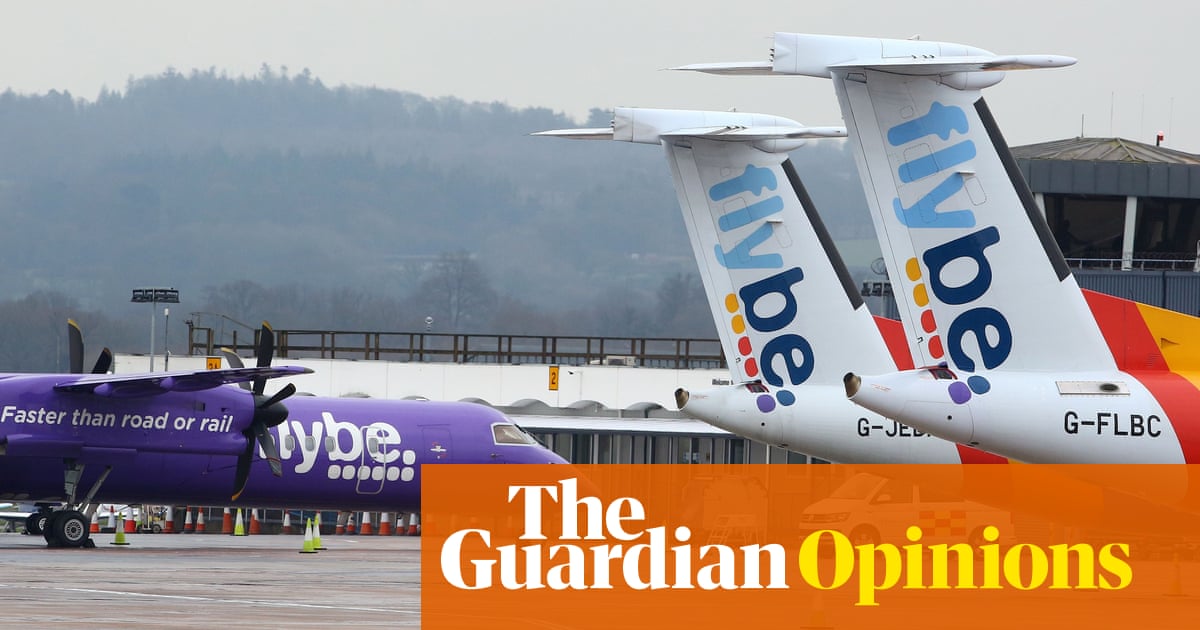 The collapse of the regional airline Flybe carries a serious and timely warning for Boris Johnson’s government. Having campaigned in December’s general election on a promise to “level up” the disparate and unequal regional economies of the UK – and having won a spectacular election victory in some of the more deprived English regions – ministers had been keen to show that they meant it. When the Exeter-based airline threatened to collapse in January, the government duly stepped in to attempt a rescue package to keep it in the air. Now, less than two months later, Flybe has gone into administration anyway. The coronavirus outbreak’s impact on airline bookings was the last straw. The effect on regional connectivity in these islands is likely to be grim. Around 2,000 people have lost their jobs, with others likely to follow in the supply chain.

The wider lesson of Flybe is that ministers can do the right thing, as they did here, but without achieving the sustained effect that they had hoped for. This lesson matters a lot, because the problem of regional inequality is very extensive and extremely complex. It also matters because the chancellor, Rishi Sunak, is expected to set out a more strategic approach to the problem and to make it a centrepiece of next week’s budget. It is important for the regions and the country, never mind the government, that he gets it right. Flybe is a reminder in two ways that this is not easy: first because big sums of money are often involved over a long period in effective government interventions, and second because the economic impact of coronavirus may also be fierce in unforeseen ways.

None of this should cast doubt on the importance of the levelling-up project. But it underlines that such a project is costly, complex and long-term. It won’t do for the project to be merely a slogan. But it won’t do either to dismiss it as hopelessly inadequate even before it has begun. The test of it will lie in a variety of things, among them the scale of the financial commitment, the breadth and adaptability of the approaches, the role of local democracy, and the recognition that the benefits (and any disbenefits) may only become clear over a much longer period than one electoral cycle. For that reason, the chair of the Industrial Strategy Council, Andy Haldane, was right to suggest last month that a system of targets will be necessary.

In a well-timed pre-budget intervention this week, a report from the centre right thinktank Onward proposes a series of areas and goals on which Mr Sunak could concentrate. The core of the report is its argument that investment to improve prosperity and productivity goes disproportionately to regions that are already more prosperous and productive. This argument has often been made in relation to capital investment in transport, and is also a frequent source of complaint in the cultural sphere. But the report broadens the charge. London, it argues, gets nearly twice the UK average R&D spend per head and five times as much support for affordable housing as the rest of England. Only London and Scotland consistently benefit from above-average spending levels in all the areas surveyed in the report.

Mr Sunak has an opportunity to start to turn the tide next week. The Onward report lists several options: they include changing the Treasury’s “green book” methodology favouring London and the south-east, ringfencing funding for less wealthy regions like the east Midlands, and more devolution. This last is particularly important. Regions need an effective democratic voice in this reallocation. Mr Sunak could also consider the suggestion that instead of confining the UK’s cutting-edge technology research inside the south-east’s existing “golden triangle”, it could be centred in Glasgow or Newcastle.

This is, in every sense, a national debate for Britain. The country is out of joint. The nations and regions need a new growth-enhancement settlement. All the political parties know it. Innovative thinking on the centre-right exists alongside Labour’s big debate about the revival of towns. Britain has a long and at times effective tradition of levelling through economic transfers. It is in need of revival. This could be a big moment for that. Much will depend on how far Mr Sunak rises to the challenge next week.