Police hunting a group of four yobs who beat up a Singaporean man after goading him about coronavirus have arrested two teenage boys.

The suspects, aged 15 and 16, were held by detectives probing the ‘racially aggravated’ assault of Jonathan Mok, 23, in central London on Monday, February 24. He says he was punched multiple times by a group telling him they did not want coronavirus ‘in my country’, while an onlooker pleaded with them to stop.

Mr Mok said he was walking on Oxford Street, near Tottenham Court Road station, at around 9.15pm when he heard shouts of ‘coronavirus’.

The University College London student, who has been in the capital for two years, said violence erupted after the group passed him and one made a remark about coronavirus.

According to the victim, as he turned to face the group, one of the men said: ‘Don’t you dare look at me’, before launching an attack.

Mr Mok continued: ‘All of a sudden, the first punch was swung at my face and took me by surprise. When I was still shocked by the first hit, the guy delivered the second sucker punch.

‘By then, a few passers-by had stopped and one of them tried to reason with them that four on one was not fair.

‘The attacker’s friend tried to swing a kick at me as I was explaining to the passer-by that I hadn’t done anything at all.

‘I tried to react in self-defence but couldn’t do anything substantial because I was still recovering from a broken finger in my master hand.’

He added: ‘The guy who tried to kick me then said “I don’t want your coronavirus in my country”, before swinging another sucker punch at me, which resulted in my face exploding with blood (from my nose), where the blood was splattered all across the pavement.’

Mr Mok, who included pictures of his injuries in a Facebook post that went viral, said the attack left him ‘dazed and shocked’.

Detectives are still appealing for help in tracing other suspects.

‘There’s no room on our streets for this kind of violent behaviour and we are committed to finding the perpetrators.’

She added: ‘I am keen to speak to anyone who has information about this assault.
‘I would like to identify and speak to the males pictured who may be able to help me with our enquiries.’ 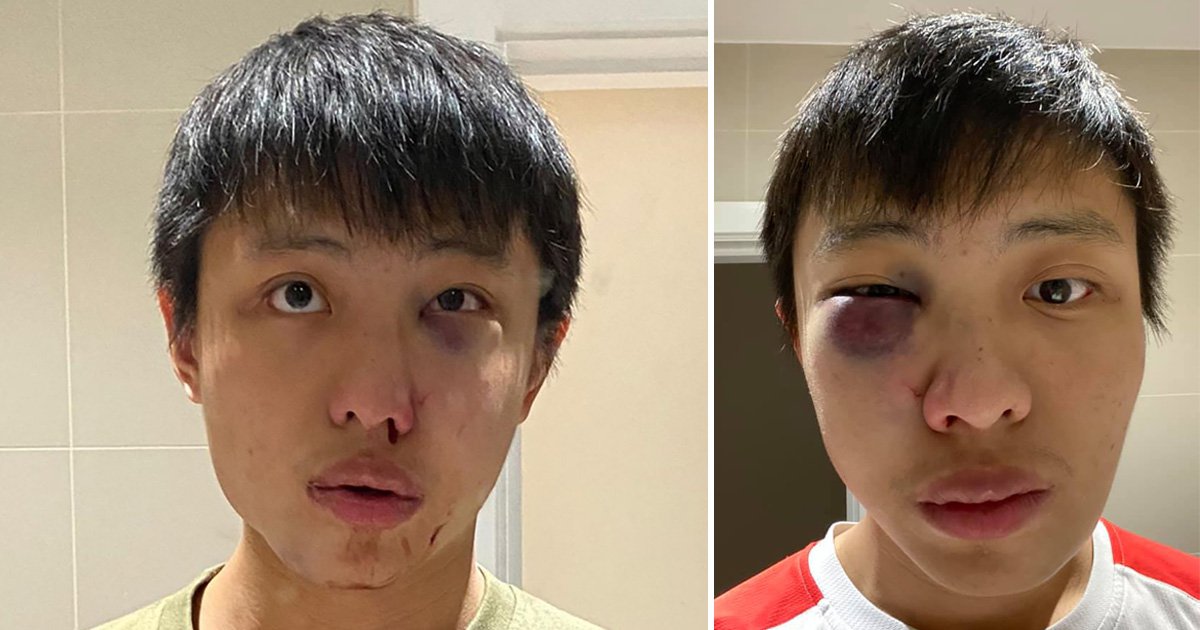