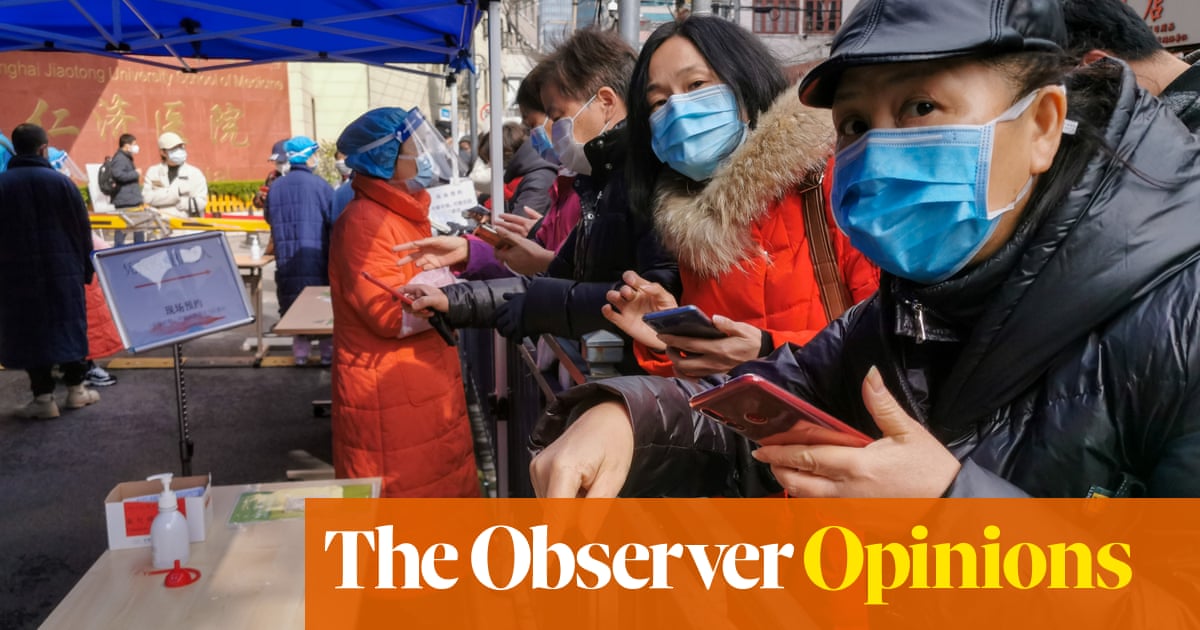 When Barack Obama was US president, his chief of staff, Rahm Emanuel, had a useful motto: “Never let a serious crisis go to waste: it’s an opportunity to do things you think you could not do before.” The Chinese authorities have clearly taken this to heart – as evidenced by the unprecedented scale of their geographical lockdowns and quarantining, restrictions on movement, industrial slowdowns and heightened surveillance.

At this distance, it’s impossible to judge how effective these measures really are. But all the experienced China-watchers of my acquaintance tell me that one should never underestimate the gap between realities on the ground and the story as told from Beijing. An instructive illustration of this is provided by a fascinating dispatch from Wuhan in the London Review of Books. It’s by Wang Xiuying (who describes himself as “a pessimist who’s trying hard to stay positive in self-quarantine”). He tells of a good deal of local chaos and serious tensions between the provincial authorities and the big cheeses in Beijing. He also describes great local heroism (particularly among health workers) and self-sacrifice. All of which sounds more plausible to me.

One thing that does appear to be happening in China, however, is deployment of the state’s surveillance capabilities. At the heart of the project is the ubiquity of smartphones. According to the New York Times, citizens are now being required to install an app on their phones that dictates whether they should be quarantined or allowed into subways, malls and other public spaces. People sign up for the “Alipay health code” and are assigned a colour code – green, yellow or red – that indicates their health status. A green code enables its holder to move about unrestricted. Someone with a yellow code may be asked to stay at home for seven days. Red means a two-week quarantine.

The system is already in use in 200 cities and is being rolled out nationwide. The NYT report has an interesting video showing a subway guard checking every passenger’s colour code as they go past the gate. But an analysis of the app’s code found that it does more than decide in real time whether someone poses a contagion risk; it also shares information with the police, setting “a template for new forms of automated social control that could persist long after the epidemic subsides”. Writing in the Georgetown Journal of International Affairs, the legal scholar John Palfrey describes how this system has been used to track “code red” travellers through subway and railway networks back to their family homes in Wuhan, where police tape is put over their front doors and neighbours are asked to call a hotline if they see anyone leave the premises.

Meanwhile, back in the UK, we’re in a “phoney war” phase as we wait for infection to spread. But already there are useful lessons to be learned. The first is about the fragility of supply chains. If humanity survives for another century or more, one of the things that will puzzle future historians is how we failed to notice that we were building an entire civilisation on top of logistical systems of unbelievable complexity and vulnerability. We are finally beginning to realise that while “just in time” production and delivery systems may be good at reducing overheads, they are also only as strong as their weakest links. And an overwhelming number of those links are in China and points further east. If you doubt that, just visit an Apple store and ask to buy a pair of the company’s fancy new earbuds. And chains like this do not degrade gracefully: they can fail suddenly and without warning.

We’re also learning more in this unfolding crisis about the terminal malignancy of social media. On 19 February, a group of 27 public-health specialists published a letter in the Lancet expressing their concern that “the rapid, open, and transparent sharing of data on this outbreak is now being threatened by rumours and misinformation around its origins. We stand together to strongly condemn conspiracy theories suggesting that Covid-19 does not have a natural origin.”

Among the posts providing the “user engagement” that social media platforms prize are stories claiming that the virus was created by the CIA, and that it was bioengineered by the Wuhan Institute for Virology, or that a lab worker was infected while handling a bat and then transmitted the disease to others outside the lab.

Finally, isn’t it interesting how we have heard nothing recently from Michael Gove about how tired the public is of hearing from experts? Miming seriousness about the coronavirus threat while being flanked by two real, grownup experts – people who actually know what they’re doing – must have been a salutary experience for Boris Johnson. Wouldn’t it be nice if as a result of this crisis we rediscovered how important it is to be governed by people who know what they’re doing.

Up close with the Donald’s eminence grise
Want to know the man behind Trump’s social media guru better? Andrew Marantz has written a compelling New Yorker profile of Brad Parscale .

Just when you thought it was safe to get back in the pool…
Why Uber and co are bad for the climate: read the Union of Concerned Scientists’ counterintuitive findings on their website.

Be afraid… be very afraid
How to destroy a democracy: read George Packer’s startling – and really alarming – account in the Atlantic of how successful Trump has been at eviscerating the institutions of the American state.