Tense footage shows a homeless man wish coronavirus on a commuter during a furious confrontation on a London overground train.

It is unclear how the argument began, but it appears the man may have asked his fellow passenger for money to help him pay for somewhere to sleep.

The video begins with the homeless man telling the older man he is ‘rude’ and ‘abrupt’ as the train approaches London Fields railway station in east London. Before he can finish his sentence in the incident, believed to have taken place on Tuesday March 3, the seated man shouts: ‘Go to the next carriage then.’

The homeless man, who appears to be wearing a sling, then tells him he is ‘out of order’, adding: ‘Just because other people come up to you like that. I’m not like that. I actually got stabbed. I just want to get somewhere to sleep.’

The seated man, who is wearing a black coat, shirt and glasses, replies saying ‘I told you, f**k off’, which prompts the homeless man to put his middle finger up and tell him to ‘sit on that’.

He then offers to fight him, saying: ‘You want to start me, start me. Go on, start me. I’ve got a broken hand.’

The older man, who has been looking at his phone for much of the conversation, responds telling him to ‘f**k off’ again.

The clip, which was posted to Twitter, then cuts to a later moment in the confrontation where the younger man tells the other passenger he is ‘rude and absolutely ignorant’.

He then adds: ‘You’ve got no self-respect, you’ve got nothing. I hope you seriously catch the coronavirus’.

The footage emerges after 115 people in the UK test positive for the deadly illness.

Europe’s largest regional airline Flybe has collapsed into administration on Thursday, citing ‘additional pressure’ caused by the coronavirus outbreak, while HSBC became the latest company to evacuate part of its UK headquarters after a worker tested positive.

It comes as 2,300 people –including 39 Britons- were ordered to stay on-board the MSC Opera amid panic over a virus outbreak.

England’s top doctor Professor Chris Whitty has said efforts to battle coronavirus have now entered the next phase to reduce the speed at which the disease is spreading – rather than contain it. 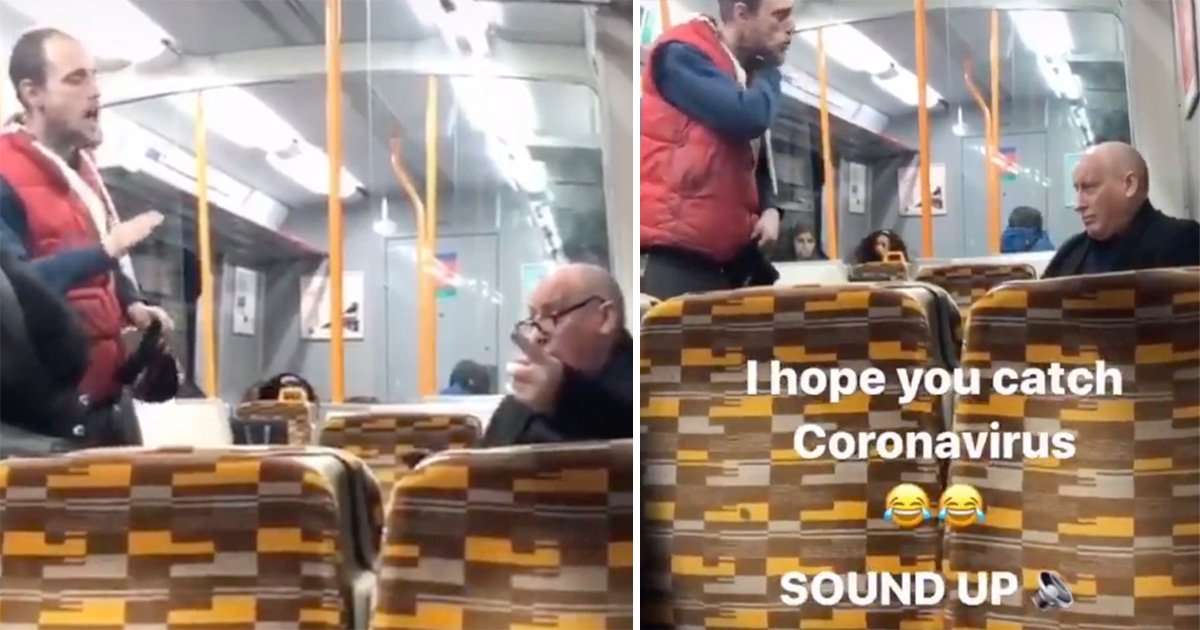