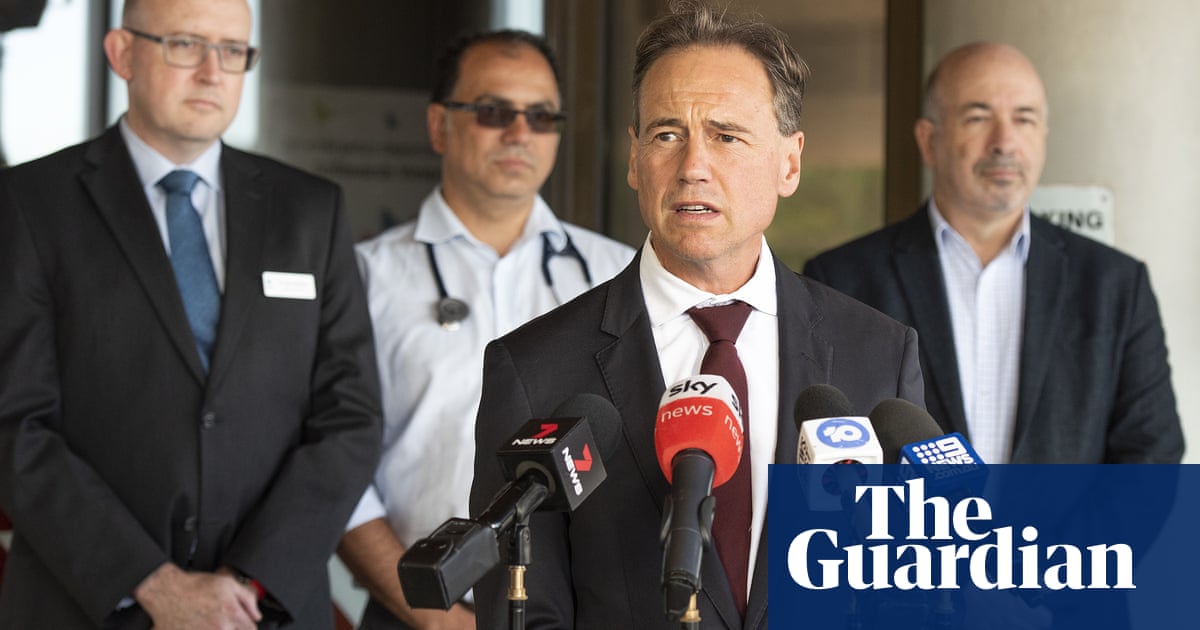 The federal health minister, Greg Hunt, has called for Australians to be their “best selves” and avoid panic shopping as the number of confirmed cases of the coronavirus in Australia rises to 74.

It follows the death of an 82-year-old man in Sydney, who is the third person to die in Australia after testing positive to Covid-19.

The man was a resident at the BaptistCare-run Dorothy Henderson Lodge aged care home, and had been in hospital since 1 March. Seven people had tested positive to Covid-19 in relation to an outbreak at that home, including a 95-year-old woman who died last week.

The Australian health minister called for people to stop hoarding supermarket supplies in preparation for the virus, saying “this is the time to be our best selves and to let our better angels prevail”.

Police in New South Wales charged two women with affray over a fight in the toilet paper aisle in a Sydney supermarket on Saturday.

“There have been some things which have occurred in recent days which have not been our best selves,” Hunt said.

He said Australia should draw on the community spirit it showed during the summer bushfire crisis, saying: “This is the moment to be its best self, and for Australia to be the nation and the community we know it can be … We will get through this together.”

Hunt said Australian authorities had secured an additional 54 million face masks for the national medical stockpile, and that, despite reports to the contrary from many GPs who say they have not been able to source appropriate personal protective equipment, no primary care network in Australia has used their entire supply of masks. Some 850,000 masks were provided through the primary care networks to GPs, and on Saturday an additional 260,000 masks were distributed.

Due to communication failures, Hunt said, some busy clinics “may not have realised” that there were more masks in store.

“I’ve spoken with the AMA and the college of GPs in the last 48 hours to make sure that they’re aware and they’re reaffirming to their members that not only are stocks available, but they have been available throughout the entire last three weeks,” Hunt said.

Two of the new cases reported in Australia are members of the Australian Defence Force, who have been placed in isolation. The ADF said it was attempting to trace people who sat near the two officers on a plane when they travelled to a meeting at defence headquarters in Canberra on 28 February.

“As a necessary precautionary measure to address the increasing risk of Covid-19 infection within defence and the general community, any defence personnel and those working in defence establishments who present with cold/flu like symptoms will remove themselves from the workplace and arrange with their local health centre or GP for testing for Covid-19,” the ADF said in a statement on Sunday.

Tasmania also confirmed its second case of coronavirus; a 20-year-old man who arrived in Hobart on 26 February via Nepal, Singapore and Sydney. He began to experience cold-like symptoms the day after arriving, and contacted the coronavirus hotline on Friday – seven days later – after his symptoms worsened, the ABC reported.

‘It isn’t Mad Max’: women charged after fight over toilet paper in Sydney

The man is a student in Hobart and Tasmania’s director of public health, Mark Veitch, said he had worked several casual shifts at the Grand Chancellor Hotel in Hobart in recent days. Veitch said the man did not comply with advice from doctors at the Royal Hobart hospital that he self-isolate between being tested for Covid-19, which happened on Friday night, and getting his results the next day. On Sunday he was in isolation in hospital.

“It is unacceptable to continue activities in public or attend work while waiting for the coronavirus test results,” Veitch told the ABC.

Seven people – four in the same household and three friends of the man – had been placed in self-isolation for 14 days, and authorities were contact tracing anyone who may have had prolonged contact with him at the Grand Chancellor Hotel.

Hunt said the issue of casual workers having to miss work without sick leave if they are made to self-isolate for 14 days would be addressed at a national roundtable chaired by the federal attorney general, Christian Porter, in Sydney on Tuesday.

He said the advice for anyone who believes they may have been exposed is to self-isolate, even if their symptoms would not usually prompt them to visit a doctor.

“If in doubt, get yourself tested – that’s the important message,” he said. “Even though it can be a little bit of a stress on the system, we would rather people over-test rather than under-test.”