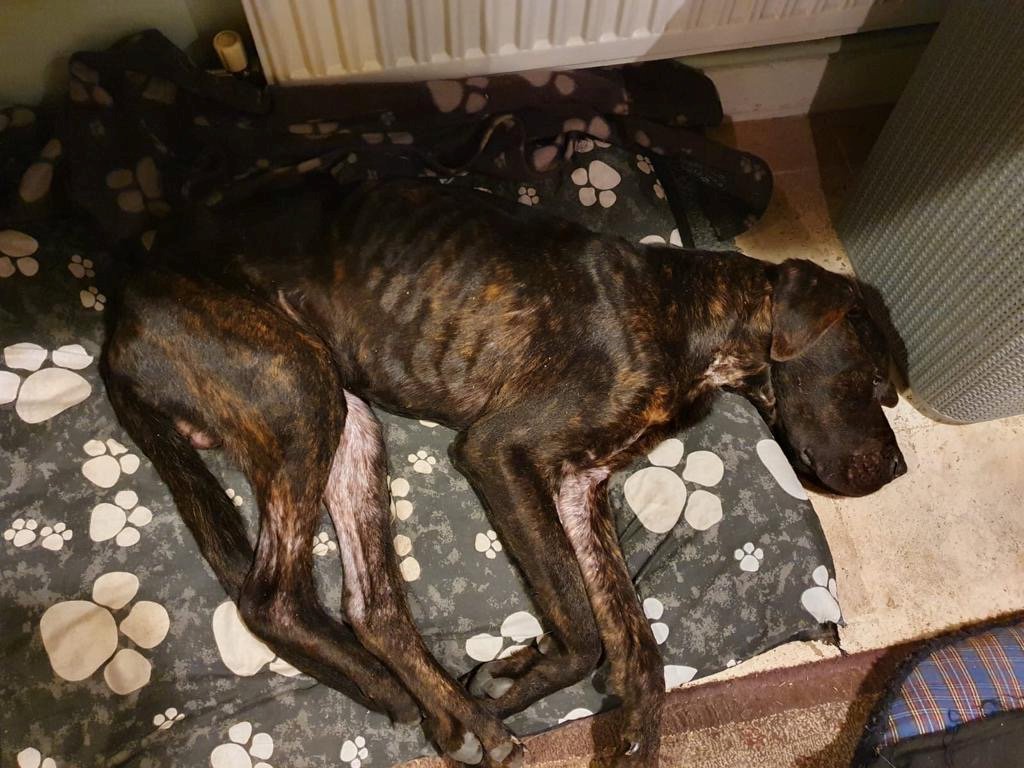 A dog found looking like a ‘walking skeleton’ has been rescued by a Good Samaritan after being dumped on a country lane.

The brindle Mastiff-type had several fractures in his leg, was severely underweight and struggling to walk.

Vets feared he would not survive after he was found by Martin Yates on his way to work on February 25.

Martin and his wife Claire have now rehomed the dog and renamed him Big Mac.

The RSPCA has launched an investigation as it is the second time an emaciated dog has been dumped at the spot in Albrighton, near Wolverhampton, within a month.

Martin and Claire whisked their new pet to the vet, where it was discovered he weighed just three stone – half of what he should.

An x-ray also revealed Big Mac had a fracture in three places on his right leg and his hip was also displaced.

Claire said: ‘He was in a horrendous state with all his bones protruding and he was so cold the vet couldn’t even get a blood sample from him at first.

‘There was a real fear that he might not survive.

‘He was given painkillers and the vet said we could take him home and feed him small meals to build him up for a few days to get him strong enough for two operations.

‘This week he has undergone an operation on his back leg, which was fractured in three places, and also on his hip which was displaced.

‘He seems to be recovering well and eating well too.’

Claire said he was settling in well at their Wolverhampton home, alongside their daughter Zoe and two border collies Bob, 14, and Alfie, 17 months.

She added: ‘At first he was a bit quiet. Alfie came over with a ball for him, trying to get him to play.

‘Big Mac just looked at it – like he hadn’t seen a toy before.

‘But he has settled well and every time I open the fridge door he is there.

‘Obviously he has been deprived of food for a long time and plans on making up for it.

‘We just couldn’t help but get attached to him while we were helping him so we decided we wanted to give him a life he deserves.

‘It is so nice to see him recovering well but I hope the person who left him in this state is found and brought to justice.’

In January, the RSPCA received a call about a boxer cross-breed, who was found with an obvious leg injury and close to death through starvation.

The dog has been renamed Honey and is recovering well under the care of the animal charity.

Dawn Burrell from the RSPCA said: ‘This is the second neglected second dog to be dumped on this road in a matter of weeks so we can’t rule out these incidents are linked.’

Neither dog was microchipped and they have urged owners or anyone with information to get in touch.

Big Mac has run up some hefty vet bills and Martin and Claire have set up a Facebook fundraising page to pay towards another leg operation and hydrotherapy.