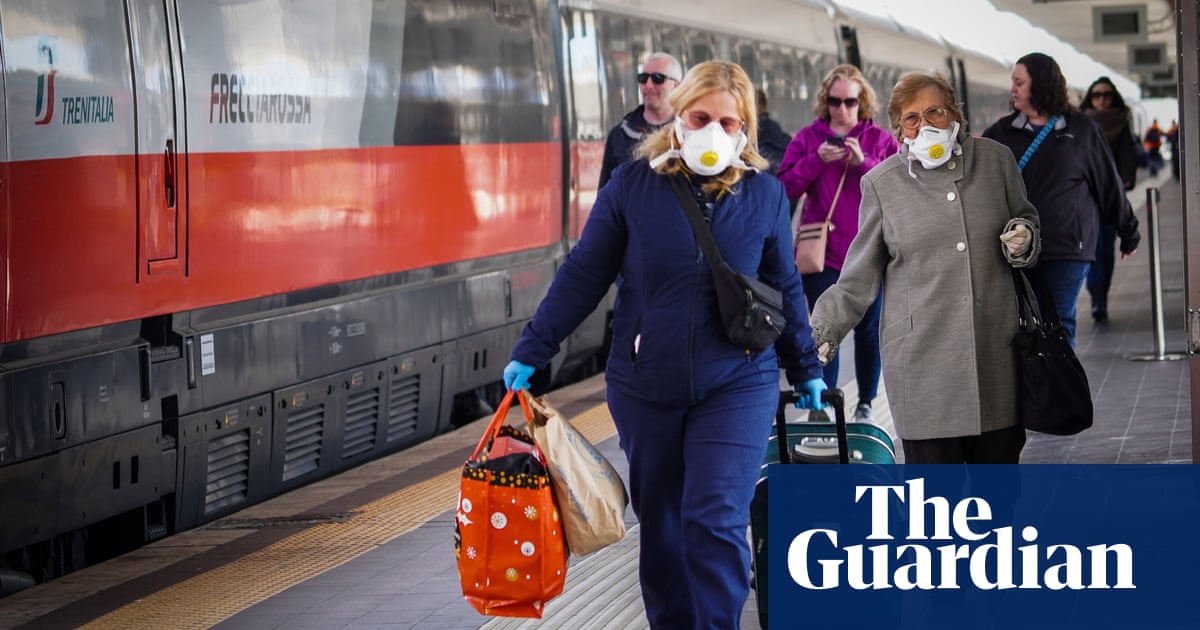 Austria’s chancellor has said other European countries will be forced to adopt containment measures as drastic as Italy’s, after Rome placed a quarter of the population in lockdown in an effort to halt the rapid spread of the coronavirus.

As the head of the World Health Organization praised Italy’s “genuine sacrifices”, Sebastian Kurz said the situation in Austria, which has reported 99 Covid-19 cases, was under control and the measures it had adopted were appropriate for the time being.

He said EU leaders and health ministers were in close contact over their countries’ handling of the epidemic, which according to the Johns Hopkins tracker has so far infected more than 107,000 people worldwide and claimed more 3,650 lives.

“It will be important to decide which steps to take when,” Kurz said. “You can close schools for one or two weeks and this is urgently necessary in Italy. It will happen in other European countries. The decisive question is when to do it.”

The difficulty will be in balancing the need to head off a peak in infections that could paralyse public health systems against excessively economic damage, he said. “You have to consider carefully when to adopt these measures, because a national economy cannot handle this over too long a period,” he added.

Speaking to French radio, Thierry Breton, the EU commissioner for the single market, said European countries were constantly updating each other on the virus’s advance. “Each is acting according to the latest available data in their countries,” he said.

“The virus has spread faster in some places than in others, so naturally the measures in each differ,” Breton said. “They will continue to evolve as appropriate.” He said Brussels was working on an “ecosystem that will support those small and mid-sized companies that are already experiencing problems.”

The WHO director-general, Tedros Adhanom Ghebreyesus, tweeted his appreciation for Rome’s efforts after the government published a decree barring people from entering or leaving vast areas of northern Italy without good reason until 3 April.

The quarantine zones are home to about 16 million people and include the regions around Venice and the financial capital, Milan. Cinemas, theatres and museums will be closed nationwide and leave has been cancelled for health workers.

The prime minister, Giuseppe Conte, said the country was facing “a national emergency”. Italy had chosen “to take the line of truth and transparency and now we’re moving with lucidity and courage, with firmness and determination,” he said.

Ghebreysesus said the government and people of Italy were “are taking bold, courageous steps aimed at slowing the spread of the coronavirus and protecting their country and the world. They are making genuine sacrifices. WHO stands in solidarity with Italy and is here to continue supporting you.”

The lockdown allows people – including tourists – who were in the affected areas temporarily to return home, and Italy’s borders with Austria, Switzerland and Slovenia remained open. Trains, and flights from Milan and Venice airports, were functioning normally, despite some calls for the country to ban foreign travel.

Pope Francis expressed solidarity with the victims of the virus in a prayer and message livestreamed from the Vatican. Elsewhere in Europe, France confirmed 949 cases and 16 deaths, with 45 people in intensive care. Schools and kindergartens are closed in two départements, Haut-Rhin and Oise.

Germany’s health minister, Jens Spahn, said organisers had been too reluctant to act but all public events with more than 1,000 participants should be called off. “Given how fast things are developing, that should change quickly,” he said. Bulgaria reported its first case on Sunday.

Spain confirmed 589 cases – a rise of 159 from Saturday – and 17 deaths. Residents in parts of the small town of Haro in the northern Spanish region of La Rioja remain in lockdown following the discovery that 39 people had contracted the virus after attending a funeral in the Basque country.

Belgium said it had confirmed 200 cases, including a second at the the European council in Brussels. Nearly 50 of the 3,000 staff at the organisation, which hosts ministerial meetings and EU summits, were told to stay at home. The council said the man had attended a meeting of EU ambassadors on March 2.

In Iran, 49 new deaths were reported on Sunday, the country’s highest toll for a single 24-hour period. The figure brings the total of those killed by the virus in Iran, which has recorded 6,566 confirmed cases, to 194, one of the highest outside China.

In the US, the epidemic has spread to 30 states, killing at least 19 people. A man in his 50s tested positive for the virus in Washington, the first confirmed case in the capital, and another person who travelled through the city has also tested positive in Maryland. New York announced a state of emergency.

Two people who tested positive have died in Florida, marking the first deaths on the US east coast attributed to the outbreak. Donald Trump said he was not concerned at about the coronavirus getting closer to the White House.

More than passengers on the US cruise ship Grand Princess have tested positive and the 3,533 passengers on board the vessel, which is to be allowed to dock in Oakland, California, on Monday, have been confined to their cabins. Another cruise ship carrying 2,000 people, the Costa Fortuna, was turned away by Malaysia and Thailand.

Colombia and Cost Rica reported their first cases of the virus over the weekend and a 64-year-old man died in Argentina, marking the first coronavirus fatality in Latin America.

The number of infections in South Korea passed 7,000, the highest in the world outside China. In China itself, however, only 44 new cases were reported on Sunday, the lowest in weeks, nearly all of them in Wuhan, the centre of the outbreak and the remainder imported from abroad, including Italy and Spain.

At least 10 people were killed in the collapse of hotel in Quanzhou, in eastern China, that was being used to isolate people who had arrived from other parts of the country, authorities said on Sunday.

The WHO said the efforts of China and other countries were “demonstrating that spread of the virus can be slowed”.