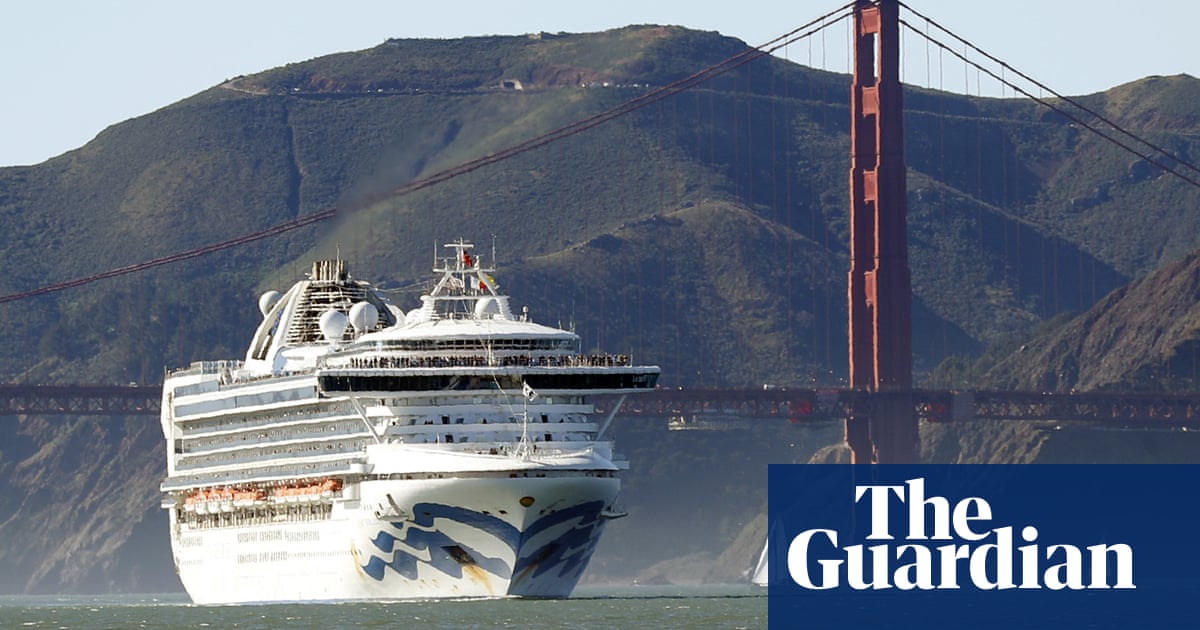 At least 142 Britons are among more than 2,000 passengers and crew being quarantined on a cruise ship off the coast of California because of fears they may have been exposed to the coronavirus.

No one was allowed to leave the Grand Princess, which was stuck off the coast of San Francisco, with guests being confined to their rooms pending test results. Meals were delivered to their cabins and they had been given free internet access and extra films to watch on the onboard televisions, Princess Cruises said.

Last week a passenger on its sister ship, the Diamond Princess, which was quarantined in Japan, became the first UK citizen to die from the virus. The first coronavirus death on UK soil occurred on Thursday when an older woman with underlying health issues died at the Royal Berkshire hospital.

The number of people in the UK to have tested positive for Covid-19 has risen to 116. The health secretary, Matt Hancock, said the government was working with supermarkets to ensure food supplies were maintained as the number of people self-isolating with the virus was expected to rise.

Hancock told BBC’s Question Time on Thursday night there would not be food shortages. “The government has supplies of the key things that are needed, and, within the food supply, we are absolutely confident that there won’t be a problem there. And, crucially, we are working to makes sure that if people are self-isolating, they will be able to get the food and supplies that they need.”

He said: “The very, very strong advice from the scientists, from the medics, is that people should not go buying more than they need.”

The chief executive of NHS providers, Chris Hopson, said the health service was rapidly preparing to cope with the virus and that no other country was better equipped to deal with the crisis than the UK.

Speaking on BBC Radio 4’s Today programme, Hopson said all acute hospitals were being equipped to handle coronavirus patients so they did not have to be transported to regional centres, and more pathology laboratories were now able to test for the virus on site. Hospitals were also creating isolated wards for patients with the disease to separate them from people with other conditions, he said.

Hospitals were considering increasing ambulance capacity because each time a vehicle transported a suspected coronavirus patient it then went out of service for deep cleaning, he said. The NHS was also increasing capacity on the 111 phone line.

Hopson admitted the NHS was under pressure, with ambulance response times lengthening and people struggling to get through on the 111 line. However, he said: “When you talk to the experts at the World Health Organization (WHO) and say: ‘Would you rather be in South Korea, Italy, America, China?’ everybody, virtually, says the UK is one of, if not the best place to be, because we have a national health service with fantastically trained staff, where we are used to dealing with these emergencies.”

The government’s chief scientific adviser, Sir Patrick Vallance, told Today that those most likely to die from the virus were people aged over 80, and it was not yet clear whether younger people with immune deficiencies or vulnerabilities were at risk.

He said a vaccine against coronavirus would not be developed in time to immunise people during the current outbreak.

However, he said, clinical trials had begun around the world to test the efficiency of anti-viral drugs against Covid-19 and the UK would want to take part in these before long.

“I don’t think we will get something at time and at scale for this outbreak. That said, there have been remarkable changes in the ability to make vaccines and discover vaccines, just in the last few years, and so things have progressed much more quickly then they would have done in the past. And it’s not unreasonable to assume we will end up with a vaccine and we will do so within a year, 18 months, which is remarkable when you consider just a few years ago it would have taken 20 years to do that.”