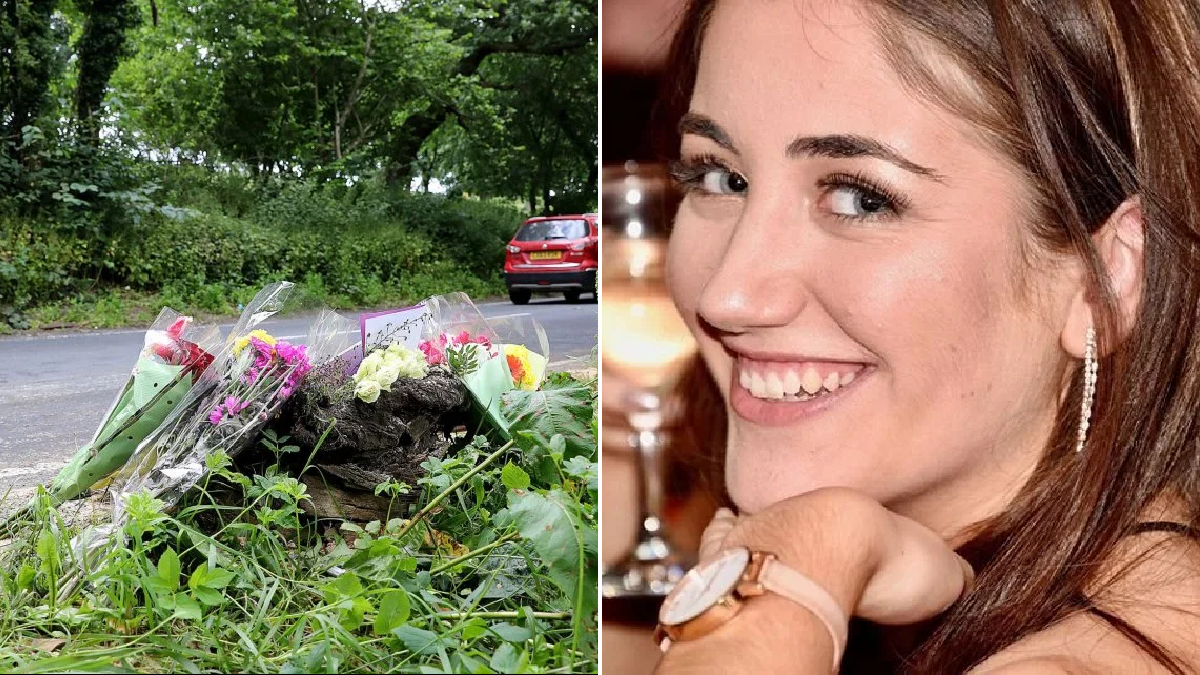 Two teenagers have been jailed for causing the death of a friend who screamed to ‘slow down’ minutes before a fatal crash.

One of the drivers, a 17-year-old who cannot be named for legal reasons, passed his driving test the day before he smashed his Ford Fiesta on June 17, last year. He had been ‘using the road as a racetrack’ to compete against friend Thomas Henry Quick, now 18, who ‘egged him on’ while driving on the opposite side of the B5105 carriageway, between Clawydd Newydd and Ruthin, Wales.

The 17-year-old’s passengers were heard on dashcam footage screaming for him to slow down, while one shouted ‘all our friends are going to die today’, minutes before he crashed into a Mercedes head-on at almost 80mph.

His close friend ‘adored’ Olivia Alkir, 17, died instantly and two other teenage girls in the vehicle suffered life-changing injuries. The 52-year-old driver of the Mercedes and his elderly mother were also badly wounded.

Judge Niclas Parry told the court it was ‘one of the worst examples of dangerous driving one can imagine’ and that it has encouraged him to write to the government asking to ban newly qualified drivers from carrying more than one passenger for 12 months.

He also wants to see no newly qualified drivers being able to drive without a speed restriction device applied.

Dashcam footage showed their recklessness in the hours leading up to the tragedy, with the boys overtaking each other on blind bends, with their wheels leaving the ground on several occasions.

Earlier that day the group of friends travelled in a convoy of three vehicles with Quick and the 17-year-old who raced each other near Llysfasi College, while others filmed it.

John Philpotts, prosecuting, said Quick, who was 17 at the time of the crash, had ‘manipulated’ his newly qualified friend who ‘won’ both races that day and boasted about his victory.

Friends said he ‘seemed to think he was invincible’ after reaching speeds of up to 110mph on one occasion, as he approached a 20mph zone. He also drove into a ditch after a near miss with another car.

When the vehicles reached the carriageway, witnesses said Quick sped off first driving up to 90mph, while his friend followed quickly behind before crashing.

Olivia was pronounced dead at the scene, while the two others passengers suffered a ruptured bowel and several broken bones.

Impact statements from Olivia’s parents, read out by her mum Joanna in court, described the devastating effect her death has had on the family and that they are now just ‘waiting to die’.

The driver, who was also injured, said he had no memory of the accident nor the day before or after.

In a letter, he described Olivia as his ‘close friend’, adding: ‘Because of something I did, she lost her life and that will stay with me forever. I wish I could turn back the clock.

‘I am so sorry. I wish I could change what happened.’

Defending, Debra White, said he was a ‘quiet teen’ who did well at school and ordinarily didn’t take risks but accepted his actions had ‘devastating consequences’ for which he takes ‘full responsibility’.

Quick, a prefect, said in a letter written to the court, that he feels ‘deep shame’ about his ‘immaturity and arrogance’ in the days leading up to the tragedy. He said he will ‘never be able to express how sorry I am’.

Passing sentence, Judge Parry told the teenagers their actions had shattered Olivia’s family ‘beyond repair’ and changed the lives of those injured forever.

He said it was ‘purely down to your arrogance, selfishness and egotistical conduct’.

Thee 17-year-old saw his chance to drive fast before a speed-limiting black box was due to be fitted the next day, he said, ‘without a care in the world for the safety of your passengers who were your close friends’.

Judge Parry added: ‘This serves as a warning to other young impressionable people often influenced by peer pressure of the significant danger of entering the vehicles of those who have made clear their determination to take deliberate risks.’

Along with their jail sentences, the pair were disqualified from driving for more than five years.