A prominent anti-Brexit QC who clubbed a fox to death while wearing his wife’s kimono will not be prosecuted.

Jolyon Maugham tweeted about the incident last December, telling the world: ‘Already this morning I have killed a fox with a baseball bat. How’s your Boxing Day going?’

He said he had to kill the animal with a baseball bat because it was trapped in fencing near his chickens and was distressed.

But he faced an immediate backlash from fox-defenders, who said it was wrong to do so and called for him to be prosecuted.

In a statement, the RSPCA said: ‘An independent post mortem and forensic veterinary assessment of the fox’s body was carried out and findings indicate the fox was killed swiftly.

‘Therefore, in this case, the prosecutions department determined that the evidential threshold needed to take a prosecution under the CPS code was not met under any legislation relating to animals or wildlife.’

It is not illegal to kill a fox, but Government guidelines state that if a fox is caught in a trap or snare on a person’s property, they must be ‘humanely’ killed.

Founder of the Good Law Project Mr Maugham released a statement saying he ‘welcomed’ the decision not to prosecute.

He said: ‘I note what the RSPCA says about killing a fox. Their advice differs from the Government’s advice to householders which says one “must” – in other words, you have no choice but to – humanely kill any fox caught on your property and that you “shouldn’t release captured foxes”.

‘I know that some were genuinely upset by my actions on Boxing Day and the tone of my tweets. I am profoundly sorry for that upset.

‘It was my intention to convey in a gently self-deprecating manner the incongruity of my Boxing Day morning. I got that wrong.

‘As to my actions, in the situation in which I found myself – needing to act in great haste to save the chickens my family keeps – I did not have the luxury of time to reflect on the competing ethical approaches of the RSPCA and Natural England.

‘Of course, I respect the different assessments others might, equally reasonably, have made.’

Get in touch with our news team by emailing us at webnews@metro.co.uk.For more stories like this, check our news page. 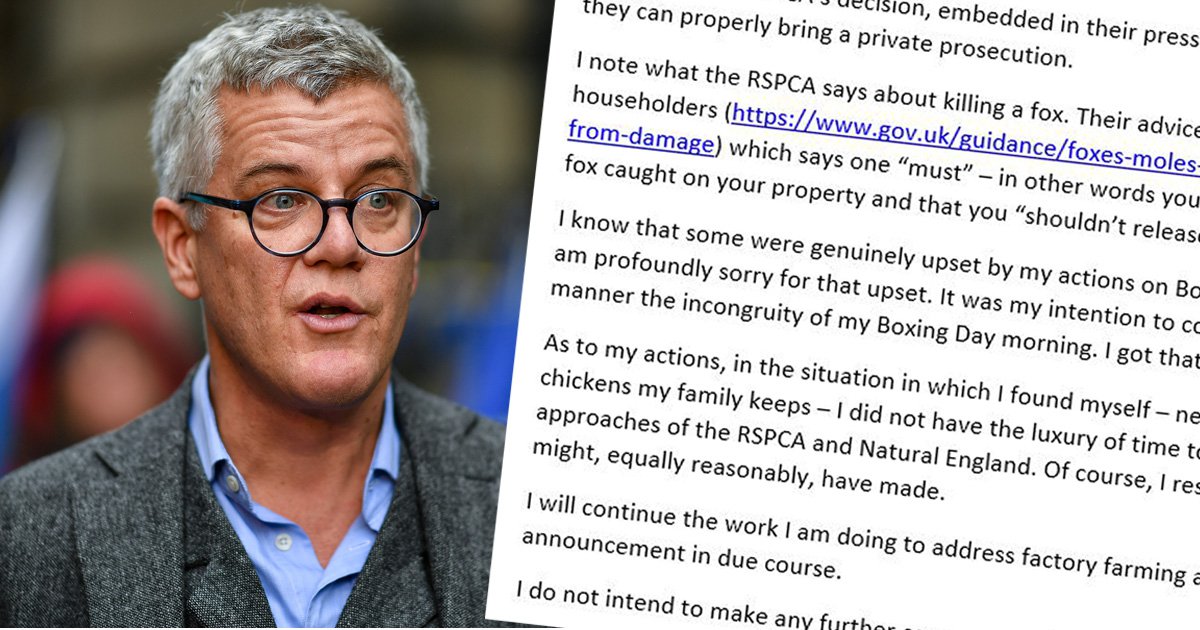